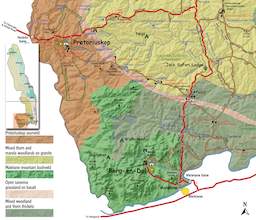 This Kruger Park Map of the South-west region will help you plan your game drive around the south western area.Enlarge Map

The best game viewing in the south-west is probably around Berg-en-Dal where the mixed grazing attracts herds of buffalo and zebra, and the lions that hunt them. The area around Afsaal usually has some animal activity because of the sweet grass. There are often lion and hyaena sightings here. Look out for rhino on the Voortrekker and Napi roads. Closer to Skukuza most of the granite outcrops have resident klipspringers.

The Voortrekker Road often has rhino. Rarer antelope to look out for in the south-west include the mountain reedbuck, Lichtenstein's hartebeest, the oribi and the grey rhebok. Pretoriuskop is better known for its scenic drives than the number of animals one is likely to see. However, it is an ideal summer camp because it is much cooler than the rest of the Park. Most rock art in Kruger is found in the south-western foothills.