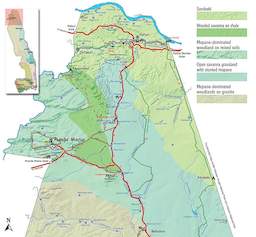 This Kruger Park Map of the Far North region around Parfuri and Punda Maria will help you plan your game drive in the area.

The main features of the far northern landscape are the Limpopo and Luvuvhu River systems, the rugged sandstone mountains in the north-west and far more diversity than the mopaneveld. There is also a small, biologically significant eco-system in the north-east known as the Nwambiya sandveld.

The far north is the birding mecca of South Africa because it has so many Afro-tropical species not seen further south. The far north is a long-standing winter feeding ground for elephant and there is a rich variety of game, particularly between the Luvuvhu and Limpopo rivers.