© Roger de la Harpe
Most of Africa's herbivores can be classified as either grazers of grass or browsers of leaves off trees. Some animals, like the elephant and impala, do both - depending on the availability of food. The grassland has been described as the “engine room of the savanna” by scientist Robert Scholes. It provides sustenance for large grazing herds, while the mixed woodland within the savanna provides the diet for the browsers. 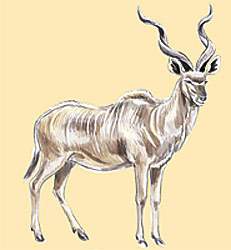 Males have large spiralled horns, weigh up to 300kg and stand 1,5m at the shoulder; females don't have horns; both have white stripes down their grey flanks; mainly browsers favouring bushwillow and acacia species; approximately 5 000 in Kruger

Dominant male accompanied by three to five females; young males form bachelor herds; when they flee their raised tails flash a white signal for others to follow; can use huge horns as deadly defences when attacked

Where best to see Kudu in Kruger Park 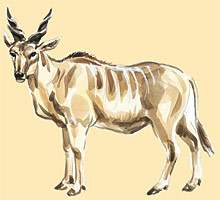 Largest antelope with distinct shoulder hump, males weigh up to 940kg and stand 1,8m at the shoulder; both sexes have horns; they can run at speeds of up to 40km/h and comfortably trot for longer distances at half that speed; amazing jumper capable of clearing a 2m fence; approximately 300 in Kruger

Grazer and a browser, small herd sizes in Kruger of between two and five animals; tend to graze at night when the water content of plants is higher; one of the gentlest animals and will not charge even if cornered

Where best to see Eland in Kruger Park 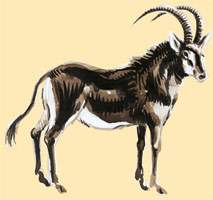 Large antelope with distinctive white and black face and long curved horns; both sexes carry horns which are up to 1,65m long; male weighs up to 270kg and stands 1,6m high. Lifespan up to 15 years; capable of running at 57km/h; approximately 550 in the Park

Grazer of medium grasses; found in groups of two to four, but cows and calves can link up with other clans in herds of up to 30 at times; strict hierarchy with male dominant; males exhibit a variety of threat displays using horns.

Where best to see Sable Antelope in Kruger Park 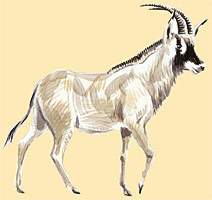 Similar to sable antelope but has smaller body, horns similar to the Sable, and distinctive white eye and muzzle patches; adult males weigh up to 300kg and are 1,5m high; endangered species that is very rare in Kruger with small population of approximately 70 in the Park

Graze by day and night; found in herds of between two and five; seldom move out of their territory; strict male-dominant hierarchy

Where best to see Roan Antelope in Kruger Park 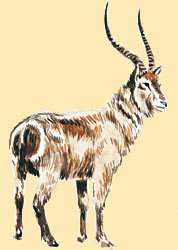 Found in herds of between 10 and 30 animals, strong runners that often take to water when pursued by predators, often submerging almost completely

Where best to see Waterbucks in Kruger Park

Usually near water throughout the Park, very common around Letaba 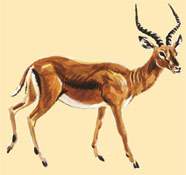 Most numerous antelope in the Park with over 130 000 adults at any one time; grazers and browsers; only rams have horns, they weigh up to 80kg and stand just under 1 metre tall ; graceful in movement, impalas can leap over a three-metre fence and can run in bursts of up to 80km/h; favoured prey of many predators

Single rams have harems of 10 ewes on average but herds can swell to over 50 after lambing season; young males leave to form bachelor herds; alpha males often challenged during rutting season in late summer

Where best to see Impala in Kruger Park

Grazer and browser; open savanna grassland but also common in mixed woodlands throughout the Park; uncommon in mopaneveld 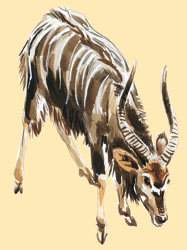 Similar to kudu except that males have white nose bands, shaggy coats tipped with white and light legs; only males have horns; males weigh up to 90kg and stand 1,2m at the shoulder; lifespan of approximately 15 years; approximately 300 in Kruger

Forest-dwelling browser, feeding during night and day; occur in mixed herds of up to 10 bulls, ewes and calves; young bulls congregate in bachelor herds; often found with impala

Where best to see Nyala in Kruger Park

Browser; dense bush along permanent water sources; more common in the north although there is a small population along the Sabie River

Medium-sized antelope with characteristic white patch on throat and white flecks on hindquarters; only rams carry horns; adult ramsweigh up to 80kg and are 1m tall; approximately 500 in Kruger

Where best to see Bushbuck in Kruger Park 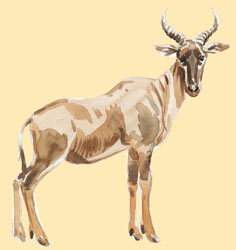 Fastest antelope, capable of galloping at speeds of over 90km/h; large reddish brown antelope with narrow face and shoulders higher than hindquarters; both sexes have horns; males weigh up to 160kg standing 1,3m high; lifespan up to 15 years; approximately 200 in Kruger

Daytime and nighttime grazer; found in groups of between two and four animals led by a dominant male; frequently use termite mounds as lookout points; can outrun most predators

Where best to see Tsessebe in Kruger Park 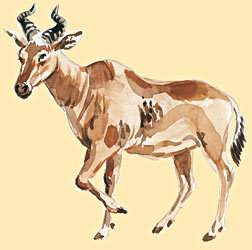 Where best to see Lichtensteins Hartebeest in Kruger Park

Watercourses in savanna grassland, mostly in the far north around Punda but also in the Pretoriuskop area

A small antelope, grey in colour; tufted crest on head and dark stripe down muzzle; seen singly; only the male has horns, which are straight; can weigh up to 21kg and stand approx 60cm high; lifespan up to 10 years; mainly nocturnal.

Mainly a browser, taking leaves and fruit but sometimes also grass and said to eat the eggs of ground birds as well as putrid meat.

Where best to see Grey Duiker in Kruger Park

Smaller than a duiker with y-shaped marking on its nose; reddish in colour with white underparts; the male has short, straight horns; male and female same size weighing up to 15kg and standing 55cm at the shoulder; lifespan up to 10 years; solitary.

Where best to see Steenbok in Kruger Park

A small antelope; found singly or in pairs; brown in colour and blending in well with the rocky areas where they live; only the male has small, straight horns.

Grazers usually found in pairs; mostly active in early morning and late afternoon; often freeze in the face of danger before bounding off; no predator can catch them once they get into rocky terrain

Where best to see Klipspringer in Kruger Park

Antelopes all have hollow horns and are classified as bovids. Two-thirds of the world's 120 bovid species are antelope - among the remaining third are cattle, sheep and goats. Modern antelope have evolved over the past 24 million years and owe their continued survival to being savanna specialists, each occupying a slightly different yet overlapping ecological niche in grassland and mixed woodland environments.

There are 72 antelope species in Africa, of which 21 are found in Kruger Park.

The Tsessebe is reportedly the fastest antelope in Kruger. This awkward-looking antelope is believed to be able to run at speeds of over 100km/h. Tsessebe also have great stamina and can gallop - at a gentler pace - for many kilometres.

There is a large variety of different species of antelopes in Kruger Park, from Eland to small antelope such as Duiker and Steenbok. The most common antelope in Kruger Park is the Impala and Kudu, while the rarest antelope is the Sable and Eland.