The very sharp horns render the Bushbuck very dangerous when wounded. The Bushbuck is a close relative of the Kudu and the Nyala. The rams are very elegant in appearance, sporting dark greyish-brown fur, with white spots on the flanks and prominent white socks. In height they are 700mm at the shoulders, and have a maximum mass of 54 Kg's.

Ewes are smaller and adult ewes are lighter in colour than rams, with more pronounced white spots and stripes. Both males and females have geometrically shaped white patches or spots on the most mobile parts of their body, namely the ears, chin, tail, legs and neck, as well as a band of white at the base of the neck.

On males these markings become more visible during their displays when they arch their backs and slowly circle one another, walking in a tense, high-stepping gait. These highly ritualized displays usually make fighting unnecessary and alongside this, a rigid age-based hierarchy among keeps males in check.

Bushbuck are mainly browsers, but on rare occasions will consume grass. They are selective feeders, but during hardship are able to adapt their feeding habits for the sake of survival.

With a gestation period of 6 to 7 months some females are able to reproduce twice a year.

The birth peak is generally during the rainy season in dry regions, but in high-rainfall areas there are not really any peaks. After giving birth, the mother cleans the newborn calf and eats the placenta.

The young calf does not accompany its mother for long periods during the day until it is about 4 months old and so it must leave the calf well hidden. When she visits and suckles it, she even eats its dung to remove any scent that remains which may attract predators. 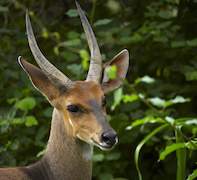 Usually most active during early morning and part of the night, Bushbucks become almost entirely nocturnal in areas where they are apt to be disturbed frequently during the day. When alarmed, individuals react in a variety of ways.

Sometimes they will sink to the ground and lie flat, or they may bound away, making a series of hoarse barks. When surprised in the open, they sometimes stand still or slowly walk to the nearest cover.

The Bushbuck is primarily nocturnal, but it is also fairly active during the day. Half of a Bushbuck's day is spent standing and grazing. Around dusk the Bushbuck move toward their night range to feed from where they off at dawn.

The Bushbuck is also the only non-territorial and solitary African antelope with neither males nor females defending any part of their home range.

Though Bushbuck have small home ranges which may overlap with those of other bushbuck, they are solitary animals with even females preferring to keep social interactions with their young to not more than a few hours a day.

Mature males usually go out of their way to avoid contact with each other.

Bushbuck's preferred habitat is dense bush at the base of mountains or along river courses. This antelope is always found close to permanent water courses.

Where Bushbuck Are Found

Bushbuck are shy and elusive bushbuck is widely distributed over sub-Saharan Africa. In East Africa it is found in a variety of habitats, though rarely on open land. Bushbucks have a lot of individual and regional differences in their coat colours and patterns.

In general, Bushbuck inhabiting deep forest have darker coats. They will live anywhere from sea level to mountaintops, from rainforests to subdesert terrain.

Bushbucks are most vulnerable to predators such as Leopard, Lions, Hyenas and Cheetah when on the run, but if cornered the male will fight bravely and if attacked may even become a dangerous foe. Even though Baboons sometimes eat the young, Bushbucks continue to associate closely with them at times, picking up fallen fruit and other foods that foraging Baboons drop.