All in all, large and small predators account for relatively few of the total number of animals in Kruger National Park. They are significantly outnumbered by herbivores, which can be broadly classified as either grazers or browsers, although many species do both. Grazers, like buffalo, depend on the grass for their nutrition while browsers, like the giraffe, have a diet based around leaves.In times of drought when grasses disappear, the distinction between the two can become blurred, as animals will eat any nutritious plant that they can. In fact, the two most successful mammals in the Park - elephant and impala - have adapted to both grazing and browsing conditions.

Generally, grazers need water at least every two days while browsers get most of their moisture needs from eating green leaves and are less dependent on regular water intake.

As a general rule, the western half of Kruger supports lower numbers of game because the grazing is inclined towards sourveld with limited patches of sweetveld. The greater herds - and most of the predators - are to be found in the open sweetveld grasslands to the east. Researcher Robert Scholes has described this savanna area as "the fuel that powers the engine of the lowveld ecosystem.

The distribution of animals in Kruger depends largely on the time of year and the quality of grazing in each area. Migration patterns have been substantially altered by the removal of fences between western Kruger and the adjoining private reserves. Game roams over a far wider area, particularly in summer when grazing is plentiful and there is widespread water.During times of drought when the grass cover is poor, there is a general decline in animal numbers. During seasons of abundant rainfall, the opposite is true. Animal populations are, therefore, continually shifting according to southern Africa's wet and dry cycles.

On the savanna, there is safety in numbers, which is why one often sees different herds of animals mingling together. The more animals there are, the less chance of an individual being eaten by a predator. Grazing animals also make the most of their collective strengths - for instance, zebra have very good eyesight, while wildebeest have excellent hearing, which boosts the survival chances of both species against danger.

Grazing species often eat different parts of the grass and, therefore, do not compete directly for food. There is also inter-species communication relating to water - wildebeest are very responsive to rain and can sense it falling up to 25km away, and thus often lead other animals to water and fresh grazing.

Grazing animals also help rejuvenate the veld by eating the grass. Buffalo, in particular, play an important role in sustaining the quality of grass. Because they can digest long, fibrous grasses, they often clean up old grazing areas and open the way for new growth.Zebra and wildebeest appear to have a close social relationship, and of all the grazers appear most prone to seasonal migration. Long-term patterns in Kruger show that these animals generally graze around Satara in summer and then migrate southwards towards the Sabie River for winter.Elephants, too, are conservationists, despite their reputation as being destructive, wasteful eaters. They can consume up to 250kg of grass and leaves a day, much of which is recycled into the environment. Many seeds are germinated by passing through the digestive system of the elephant, while the dung is also a handy source of manure for the veld.

Nonetheless, elephants are a source of ongoing controversy in Kruger with many scientists believing that the long-term prospects of the Park are severely compromised by the relatively high elephant population. Since the mid-20th century, there has been a substantial decline in the number of trees in the eastern grasslands, a decline attributed mostly to destruction by elephants.

Warthogs help aerate the soil when they use their tusks to root about for bulbs or rhizomes.

Just as grazers can co-exist on the same grassland, browsers also eat different parts of the same trees. The top feeders are obviously the giraffe, which can reach leaves that are five metres or more off the ground. They are adaptable browsers which feed on 70% of the tree species in Kruger, but favour acacias and combretum species which make up half their diet.

Giraffe lose condition during winter because these trees drop their leaves, and they are forced to eat less palatable evergreens. These animals like the flatlands of the savanna but can be seen on the rocky slopes of the Lebombo. That's usually a sign of the first spring flush in the acacias and combretums.

Elephants, too, go crazy for new growth, often knocking trees over to get at new leaves. This is often of benefit to smaller browsers as food that is beyond their normal reach becomes available closer to the ground.

Elephants, which weigh up to five tons, stand about three metres off the ground, but can compete with giraffe for the top end of the browsing market because of their trunks, which can be up to two metres long. Besides giraffe and elephant, the main browsers in Kruger are kudu, duiker, klipspringer, bushbuck, nyala and black rhino.

Kudu in Kruger are found in herds of between six and 20 cows accompanied by a dominant male or two. Most kudu bulls, therefore, live in separate bachelor herds. Kudu migrate extensively through Kruger. In summer, they disperse over wide areas of mixed woodland, while in winter they cluster along rivers and watercourses where trees remain nutritious.

Browsers tend generally to favour the thicker bush in the western parts of Kruger where the grazing is relatively unpalatable but the nutrition held in leaves is very good.

A giraffe's height - up to 5,5m - makes it physically difficult for this animal to drink and sleep. Giraffes, therefore, usually sleep standing up, although they do lie down on occasion. They are the ultimate light sleepers, snatching extremely short doses of consistent rest. Some Kruger experts believe that a giraffe sleeps for only about 24 minutes in a 24-hour period!

Giraffe have loose social structures and herds can vary in size - even on a daily basis. In Kruger, the average herd size is less than 20 individuals. The biggest recorded herd in Kruger numbered 46 animals, smaller than the herds of up to 70 in East Africa.

Giraffe herds have a constantly changing leadership of both males and females. They are territorial, ranging over an area of between 20km and 70km, depending on the availability of food. The solitary giraffe one often sees in Kruger are usually rather pungent-smelling old males which can no longer attract females. 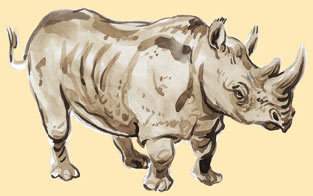 Characteristics
Distinguished from the square-lipped, white rhino by its hook lip and smaller size; males weigh up to 1,5 tons and stand up to 1,6m at the shoulder; can run at speeds of up to 50km/h; approximately 350 in Kruger

Behaviour
Shy browser that rarely emerges into the open; usually solitary but sometimes gathers in groups at water holes; not often seen in Kruger

Where best to see Black Rhino in Kruger
Browser; Thorn thickets and dense bush in southern Kruger, particularly between Skukuza and Pretoriuskop and also south of Lower Sabie. 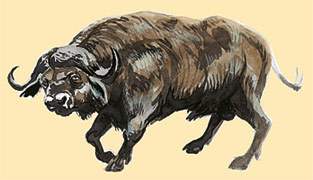 Characteristics
Thin-coated, bull-like animal with distinctive, large w-shaped horns, males can weigh up to 870kg; both sexes have horns but bull has a heavier boss than cow; known to be extremely aggressive when threatened or wounded; can run up to speeds of 55km/h; approximately 29 000 in Kruger

Food
Almost exclusively a grazer; will graze on most grass species and moribund grasses; have been seen browsing when grass is unavailable.

Where best to see Buffalo in Kruger
Grazer; open grasslands, particularly sweetveld around Satara and Orpen, as well as river valleys and around permanent water sources throughout the Park 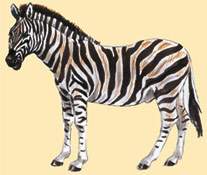 Characteristics
Unmistakable black and white striped grazer; each pattern is unique to that individual; males weigh up to 340kg and stand 1,4m at the shoulder; can gallop at speeds of up to 65km/h; lifespan of up to 25 years; approximately 33 000 zebra in Kruger.

Behaviour
Found in herds of varying sizes from three to five with dominant male, up to groupings of 50 in the open grasslands; communally grazes with other species 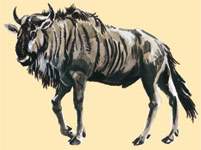 Characteristics
Dark grey bovid with pronounced shoulders which in males are up to 1,5m high; males weigh up to 290kg; approximately 17 000 in Kruger

Most of Africa's herbivores can be classified as either grazers of grass or browsers of leaves off trees. Some animals, like the elephant and impala, do...more

Bulls weigh up to 1 200 Kg and cows about 800 Kg. As such this species is smaller than the White Rhino. It can further be distinguished from the White...more

They have a dark brown to black body, an erect mane and a long whitish tail. Both sexes have heavy, forward curving horns. Bulls measure 1.2 metre at...more

Burchell's Zebra [Equus burchelli]. Body stripes are less numerous and broader than that of the Cape Mountain Zebra, whereas body stripes extend around...more

The giraffe is the tallest animal in the world, attaining a height of 5.5m, its incredibly long neck accounting for much of its height. The long neck has...more

The Hartman's Mountain Zebra's coat is characterized by its series of black and white stripes. These vertical lines are thin and relatively close...more

The Hippo is a massive, semi-aquatic mammal with a mass of up to 2,5 tonnes. It is able to walk under water on the river bed, and can remain submerged...more

Warthog (Phacochoerus africanus). This is the most commonly seen wild pig of the African Bush. It is a dull grey colour and has a naked skin which...more

The White Rhino is the third largest land mammal. Massive, stocky, and with a reputation of being not quite as aggressive as the black rhino...more

Blue Wildebeest are seasonal breeders. Births of single calves per cow occur during summer after a gestation period of nine months...more