The total length is 350 mm, half of which is tail. This species only weighs 200 gram. The coat colour varies throughout the region. In the western and arid parts of its range it is pale grey, and in the eastern localities more brown. Head and legs are a rusty colour.

Colouration on the chest varies from yellowish to buffy in the east, to white in the west. The Tree Squirrels' bellies are white. These alert and ever busy creatures carry their long tails extended backwards.

Primarily vegetarian, but like most rodents will take insect prey. Tree squirrels use their forefeet to manipulate food items when feeding. They scatter-hoard seeds next to tree trunks or grass tufts, thereby facilitating tree regeneration.

In southern latitudes they are seasonal breeders. Courtship and mating occurs during August. They give birth to one to three pups during October to November, after a gestation period of 56 days. Pups are weaned at six weeks and leave the nest to feed on its own at the age of only 19 days.

Essentially arboreal animals, but spend a great deal of time on the ground, foraging for food. When disturbed, Tree Squirrels will always seek the refuge of trees. During the night, territorial family groups nest together in holes in trees. Offspring become sexually mature between six to nine months, at which stage they are forcibly evicted by the breeding pair.

The males are mainly responsible for territorial defense, although females will also chase intruders when she cares for dependent pups. To promote group cohesion, a common scent is shared by mutual grooming, which is an important facet of the social fibre of this species.

Inhabits savanna woodlands, inclusive of a wide variety of woodland types. It favoures trees with suitable holes for nesting, such as mopane. Failing the availability of nesting crevices in trees, will sometimes use holes in the ground.

Where Tree Squirrel Are Found

The southern limit of the Tree Squirrel's distribution in South Africa, extends into the woodland savanna regions of North Western, Northern and Mpumalanga Provinces, and from here eastwards to Swaziland and Mozambique. 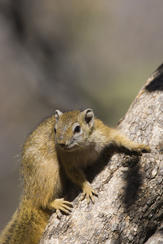