The baboon, is a truculent, cunning and intelligent animal that will eat almost anything, including small mammals and birds. Baboons have even been known to hunt baby antelope.The major part of their diet, however, consists of plants, fruits and insects. They have a distinctive harsh bark, “Wa-hoo!”, and their greatest enemy is the leopard. 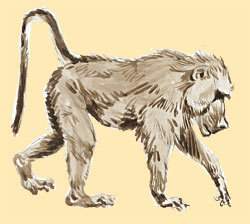 Social primate living in groups of between 30 and 40 individuals; dominant leader and strict social hierarchy; daytime feeders sleeping in trees, on rock ledges or in caves.

Throughout Kruger except in very open grassland - there are an estimated 300 troops of baboons living in Kruger. 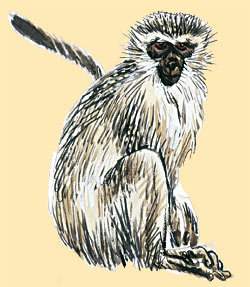 Social animals that live mostly in trees in groups of between 15 and 30; often warn other animals of impending danger.

Woodlands close to water, throughout Kruger.