It's interesting to note that where lions represent honest power and authority in the human consciousness, the hyaena is a universal symbol of the supernatural.

It's no surprise that these two beasts are archenemies. Each will attack and kill the the other's cubs or elderly or sick individuals given the slightest opportunity. The hyaena's giggling "laugh" is something to experience on a dark night in the bush.

Its hysterical shrieks have the touch of lunacy that we inherently recoil from, a negativity summed up by Ernest Hemingway in The Green Hills of Africa (1935), where he wrote of: "Fisi the hyaena, hermaphroditic self-eating devourer of the dead, trailer of calving cows, ham-stringer, potential biter-off of your face at night while you slept, sad yowler, camp follower, stinking, foul, with jaws that crack the bones the lion leaves, belly dragging, loping away on the brown plain".

Legends from as far afield as India, the Middle East and sub-Saharan Africa, all depict the hyaena as a symbol of witchcraft. In southern Africa the hyanea is often portrayed as the deliverer of a sangoma's evil spells, and its body parts command a premium price in the local muthi market. 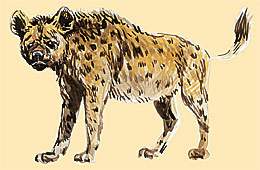 High-stamina hunters that will collectively isolate their victim, chase it and disembowel it; they are also effective scavengers.

Throughout Kruger but mostly in central savanna and around Skukuza. 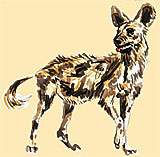 A pack will try to isolate an animal from the herd and then chase it in relays, snapping at the animal until it is exhausted and falls from shock or loss of blood.

Mixed woodlands and open savanna throughout Kruger but more common in the south-west. 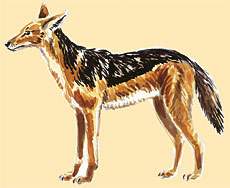 Medium-sized dog with reddish body colour, black saddle on the back and black-tipped tail; both diurnal and nocturnal; solitary or in pairs in woodland and grassland.

Scavenges on carrion but also hunts hares, birds, rodents, insects; will also eat fruits and in some areas has been observed hunting co-operatively for medium-sized antelope.

Where best to see them in the Kruger 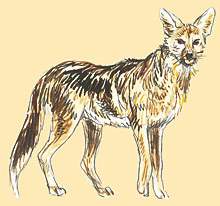 Medium-sized dog with overall grey appearance with a faint black and white stripe along the side and a white-tipped tail; nocturnal; solitary or in pairs in wooded country.

The black-backed jackal is commo, and is often seen in the central grasslands. Generally avoids the open plains and is more of a woodland animal that also favours the Lebombo. Jackals are usually solitary animals, scavenging by night and in the early morning. They are sometimes found in family packs and in such cases hunt impala and smaller antelope. They are particularly fond of ostrich eggs.

Where best to see them in Kruger Park