Think of a cheetah, and a blur of motion streaking across an open grassland springs to mind, tail bobbing to keep the predator balanced at speeds of up to 100km/hr. The Kruger National Park (KNP) is an important refuge for cheetahs in South Africa but is far more densely wooded than the Serengeti, where the majority of scientific studies on cheetahs have been carried out.

Kruger Park cheetahs have helped show that the carnivore can successfully hunt in wooded areas, not just on open grassland plains. Only two censuses of cheetah have been carried out in the Kruger Park, both using photos submitted by the public. In the 1991/92 census the public captured photos of 172 different cheetah, while the much shorter 2004/2005 census found 103 individuals.

However, this makes the park a stronghold for the species, as some estimates suggest that less than 1,000 cheetahs are left in South Africa, including those in zoos, breeding centres and private reserves. Worldwide, cheetahs have disappeared from 75 percent of their historic home range.

Dr Gus Mills, Kruger's large carnivore expert, radio-collared and tracked seven adult cheetah that lived in the KNP between the Sabie and Crocodile Rivers between 1987 and 1990. He gathered information on the animals using three methods - radio-locating the animals at certain times, following individual animals for two to 15 hours at a time, and by following some of the cheetah continuously for 14 days.

During his study, he only saw one other cheetah in the stury area that was not related to his collared animals. In 2003, together with Lynne Broomhall and Johan du Toit, he took another look at his data and they produced papers comparing the preferences of Kruger's cheetah with other cheetah populations around Africa.

They found that the cheetah preferred open areas with adjoining woodlands in Kruger. The cheetahs used the woody cover for stalking prey and the neighbouring grassy areas for chases, but also made chases in the wooded habitats. These shorter woodland chases were slightly less successful than those in the open areas.

Where to Find Cheetah in Kruger Park? 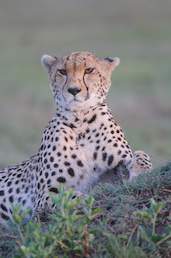 In Kruger National Park cheetahs can be found usually living in marula / knobthorn tree savannas (Sclerocarya birrea / Acacia nigrescens savannas), with the core of their home ranges in the open savanna. Male and female cheetah used the surrounding vegetation types differently, with females spending less time in the open savannas than the males and comparatively more time in the nearby Lebombo Hills and Acacia thickets.

Females generally also had larger home ranges than the males, with home ranges falling into a range from 126km2 to 195km2. Elsewhere cheetah home ranges vary from 24km2 in Matusadona National Park in Zimbabwe to 320km2 in the Kgalagadi Transfrontier Park.

The home ranges of males and females overlapped, but the animals seemed to avoid each other. Females usually frequented the drainage lines, while males spent more time near the roads, often scent marking on the large trees alongside the road.

It is thought that this might be because female cheetahs need a more reliable source of food than males to help them during pregnancy and when raising cubs, and by concentrating on impala they have access to a more predictable food supply.

Female cheetah might also prefer the thicker bush and drainage lines not only because the impala prefer them, but also to avoid other predators like lions that kill their cubs and steal their meals. Male coalitions of cheetahs are more likely to be able to drive off other predators, and so can spend more time in open areas.

With the observation that Kruger's cheetahs prefer open areas in woodland savannas, smaller reserves with cheetah populations need to consider the effects of bush encroachment on their cheetah, as the overgrowth of their open areas may prevent the cheetah hunting successfully enough to remain as viable populations.