The history of the marula tree goes back thousands of years. Archaeological evidence shows the marula tree was a source of nutrition as long as ago as 10,000 years B.C. Marula, Scelerocarya birrea, subspecies caffera, is one of Africa' botanical treasures. In the Pomongwe Cave in Zimbabwe, it is estimated that 24 million marula fruits were eaten.

Not only the fruit, but also the nut, are rich in minerals and vitamins. Legends abound on the multiple uses of the tree, the bark, the leaves, fruit, nut and kernels. Most well known as the fruit that 'drives elephants mad' when dropped to the ground and lightly fermented, marula is a much-loved tree in the veld in Africa. It was a dietary mainstay in South Africa, Botswana and Namibia throughout ancient times.

They are a deciduous tree growing up to 18 m tall. They grow on various types of woodlands on sandy loam soils. They can be found from Ethiopia to Kwazulu-Natal. They produce flowers from September to November and bear fruit from January to March. The fruits are edible and very high in vitamin C. Warthog, elephant, Waterbuck, giraffe and kudu all eat the fruit and leaves of the tree. 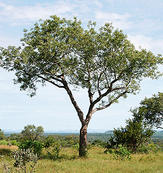 The bark can also be used to make a light brown dye. Large Saturniid Caterpillars are gathered from this tree for roasting as well as the larvae of the Cerambycid Wood Boring Beetle. Inside the flesh are one or two very small tasty nuts which are rich in protein.

Oil is used as a skin cosmetic. Their green leaves are eaten to relieve heartburn. The bark contains antihistamines and is also used for cleansing by steeping in boiling water and inhaling the steam.

A piece of bark is crushed into a pulp, mixed with cold water and swallowed in the treatment of dysentery and diarrhoea. The bark also is used as a malaria prophylactic.

The Marula fruit is very juicy and aromatic and is the size of a small plum. It may be eaten fresh and the flesh has an extremely high vitamin C content. It may also be cooked to produce jam, juices and alcoholic beverages.

It is a component of the vegetation type known as 'Bushveld' or Savannah, which is a mixed vegetation type covering the lower slopes of the plateau and the Lowveld of Mpumalanga, including much of the Kruger National Park. Companion plants typically include Umbrella Thorn (Acaia) trees, the Baobab, Fever Trees, the dark-green Mopani, and tall tufted grasses.

Marula trees are dioecious, which means they have a specific gender. This fact contributes to the belief among the Venda that bark infusions can be used to determine the gender of an unborn child. If a woman wants a son the male tree is used, and for a daughter, the female tree. If the child of the opposite gender is born, the child is said to be very special as it was able to defy the spirits.
Kruger National Park - South African Safari
©2021 Siyabona Africa (Pty)Ltd - Private Tours and Safari