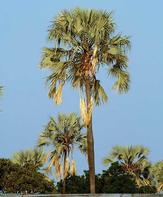 Locally called Molala, large palm trees usually grow from 5 to 7m high, but sometimes up to 15m in height, single or multi-stemmed, with a slight swelling about half way up the stem. The tree is found in low-altitude bush land and coastal bush, often forming extensive stands.

The leaves are fan-shaped and greyish green. Fruits are tennis ball size, ripening from green through orange to glossy dark brown. A thin layer of sweet-tasting, ginger-flavoured, spongy, fibrous pulp surrounds the seed. Fruits are produced in large quantities, up to 2000 per tree, each taking two years to mature and up to two further years to fall.

The fruit are somewhat variable according to locality, but generally green to pale orange at first, becoming progressively more brown with age, irregularly pear-shaped, about 60-80mm in diameter with a distinctive fruity aroma.

The outer shell is glossy and tough. Internally an edible spongy fibrous pulp surrounds the single seed. The hard endosperm, resembling vegetable ivory, has a hollow centre. Fruit take about two years to reach maturity and another two years before falling from the plant. They are dispersed by elephants, monkeys and baboons.

The milk present in the young fruit is similar to coconut milk in taste and colouring. Elephants eagerly consume the newly formed leaves, which are crisp at their base and have a pleasant coconut flavour. The crown-heart is eaten as a vegetable and is known in the Delta as 'gau'.

The pulp of the fruit resembles gingerbread. To extract the pulp, the hard exocarp is hit with a stick. The pulp is quite palatable and eaten particularly by elephants and baboons. These palms are widely exploited as a source of wine and unfortunately many are killed as a result.

Palm swifts are closely associated with this palm. They can be seen nesting in a vertical position underneath the leaves. These birds have evolved a unique method of preventing the eggs from falling by gluing them in place with saliva. The hard white kernels of the seeds, closely resembling the commercial vegetable ivory of South America, are too small to be of any economic importance though they are often used to make ornaments, trinkets and curios.

The Lala Palm is also known as the Vegetable Ivory Palm because of the hard, white ivory looking seed. The seeds are dispersed over great distances by wandering elephants through their dung.