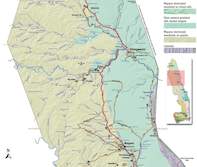 This Kruger Park Map of the Northern region around Shingwedzi and Mopani camps will help you plan your game viewing safari in the area.

The main road between Mopani and Shingwedzi divides the mopane woodlands to the west from the mopane shrubveld to the east. Elephant are the dominant browsers in the mopaneveld. The best game viewing in the north is around Shingwedzi, particularly Kanniedood Dam and the Mphongolo Loop.

There are often large herds of buffalo around Mopani and lion sightings are not uncommon. Look out for rarer Kruger antelope such as the tsessebe and roan. They are often found between Letaba and Mopani camps, particularly near the Girioyondo border post turn-off on the H1-6.
Kruger National Park - South African Safari
©2021 Siyabona Africa (Pty)Ltd - Private Tours and Safari