At least one suspected poacher was shot early on Wednesday morning, December 13, 2006 on the eastern boundary of the Kruger National Park (KNP). Rangers were meticulously patrolling the area after a rhino was poached there earlier this year.

The Crocodile Bridge section rangers found a carcass on December 4, 2006 and were on a follow-up patrol when they observed two suspects climbing over the boundary fence, which is also the international border between Mozambique and South Africa.

One of the suspects was armed with an AK47 assault rifle and KNP Field Rangers edged closer to get a better look at them. "The KNP field rangers then shouted to the suspects to stand still and the suspect with the weapon suddenly turned round," says Raymond Travers, Kruger spokesperson.

"Interpreting this as a threat, the KNP field rangers opened fire on the suspects, who split up and climbed over the fence back into Mozambique." On further investigation, definite drops of blood were found, suggesting that at least one of the suspects was injured. KNP rangers are investigating the scene for more evidence.

Look Out For Conservation Conmen

Members of the public are warned to be on the lookout for conmen claiming to be raising money for conservation. An enterprising young man, hoping to increase the income he raised from the sale of a multi-tool utility device, mingled fact and fantasy about the plight of rare antelope to create a marketing scam that purported to raise money for the conservation of roan antelope. As the man was doing his marketing in the town of Phalaborwa, his sales pitch involved the antelope in nearby Kruger National Park (KNP) and the matter was brought to the attention of Sanparks Corporate Investigation Services (CIS).

CIS soon determined the man was trying to con members of the public and reported the matter to the police. Sanparks chief executive Dr David Mabunda commented, "These solicitors do not represent Sanparks and its associated organisations, and we denounce any links to these activities. Any one found soliciting funds from the public in this manner must be reported to the authorities." The national toll-free fraud hotline is 0800 60 10 11.

The group of seven male wild dogs released into the Shingwedzi area of the Kruger National Park (KNP) on December 1, 2006 are currently suspected to be roaming in the Mozambican Limpopo National Park adjoining Kruger. According to Dr Markus Hofmeyr, head of Sanparks Veterinary Wildlife Services, the dogs stayed close to their release site near Shingwedzi for a couple of days before moving eastwards.

They then travelled along Kruger's eastern boundary for a further few days before they are suspected to have entered the neighbouring park. Before the dogs left Kruger they were seen on a kill of a nyala and a baby impala. 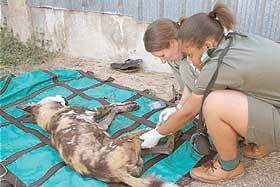 The dogs are being monitored by Lynda Hedges from the Endangered Wildlife Trust (EWT). Two of the seven dogs are collared, and Lynda is trying to track the dogs in Mozambique using the radio-tracking device in the collars. One of the dogs has a GPScellphone device in the collar, which will send GPS readings to Lynda via the cellphone network whenever the collared animal comes into cellphone reception. This will allow researchers to see exactly where the dog has been during those times when Lynda was unable to trace the animals using the radio-tracking device.

The dogs were relocated from Marakele National Park to Kruger after they had repeatedly challenged the park's fences and come into conflict with the neighbouring farmers. It is the first time wild dogs have ever been reintroduced into Kruger.

Members of the public spottingany wild dogs in the northern parts of the park are asked to contact Lynda on 083 684 4250 to give details of the sighting, such as the date, time, number of dogs and place where they were seen. Photos of wild dogs in the Shingwedzi region taken any time from June of this year would also be of help to Kruger and the EWT in monitoring the success of the reintroduction.

These photos will supplement those collected last year during the cheetah and wild dog census. Digital photos can be emailed to the chairperson of the Wild Dog Advisory Group, Harriet Davies-Mostert at harrietd@ewt.org.za or she can be contacted on 011 486 1102.