Angels on an Avian Mission 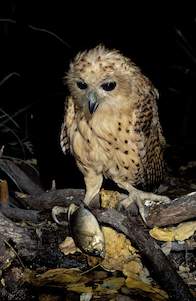 What do you get when you send a bunch of women on a mission to find a Pel's fishing owl, armed with CyberTracker equipment and a mandate to raise funds for Sanparks and CyberTracker?

You get Angels on an Avian Mission of course, the name given to a fund and awareness raising expedition made up of six Sanparks staff and forum members who recently returned from the Kruger National Park (KNP) after successfully finding the Pel's fishing owl (of course), as well as achieving a number of other serious and not-so-serious objectives.

The mission originated in response to another, all male forum expedition with similar objectives - except that their trip was in search of Duke - one of KNP's legendary tuskers, as opposed to the (in our opinion) far more elusive Pel's fishing owl.

Wanting to equal (if not surpass) the success of the Duke Pack, the Angel Team (A-Team) made up of Sanparks staff Nedret Saidova (known on the Sanparks website forum as Sanparks), Dianne Tipping-Woods (Diannet) and Sandra MacFayden, and forum moderators Gwendolen Tee (Gwen), Jackie During (Jay) and Dalene Preston (Dinky Bird), began planning and raising funds online in the form of 'pledges' from other forum members.

The forum community are as generous with their money as they are with their time and over R7000 was pledged should the A-Team return triumphant from KNP with pictures of the Pel's fishing owl in hand.

'We trained for days of river patrols, we researched the Pel's fishing owl from every angle, we studied photographs and recent sightings data', explains Jay, who travelled from Cape Town for the expedition, and who also runs the Sanparks forum bird club, the Stiffnecks.

'We discussed strategy, from what to wear, to what to eat, to increase our chances,' says Gwen, who flew in from the Netherlands for the mission. 'We got head office involved, and co-opted Sandra with her expert knowledge to bring along her CyberTracker' adds Dinky Bird, who hails from East London.

'And then, to ensure the success of the mission and to secure the funds, we decided to solicit the help of two of KNP's finest - Julius Mkansi from Olifants and the legendary Frank Mabasa from Pafuri - forum celebrities' continued Nedret Saidova, e-commerce manager at Sanparks.

'And finally to make sure that everything went OK on the day, we got amazing support from KNP's marketing manager, Rene Travers, as well as Kirsty Redman from Letaba (who was a key player in the Duke Mission), and a field guide called Barbara', concluded Sanparks web content editor, Dianne Tipping-Woods.

Search for the Pel's Fishing Owl

The Angels mission began at 04h00 on November 16, when they left Letaba for Olifants, with a brief stop en route for a fresh cheetah kill, and a river walk with the charming, knowledgeable and enthusiastic Frank and Julius.

'Their birding, as well as bush knowledge kept the A-Team enthralled', says Jay, 'and with our eyes peeled for the Pel's fishing owl, our excitement increased with every step'. 'Indicating that we should pause, Frank silently scanned the riverine foliage and there it was - the Pel's fishing-owl!' exclaims Gwen. And not one, but two!

In a ground survey of the Olifants River earlier this year, a total of nine Pel's fishing owls were seen and counted, and the owl is listed as rare in the Red Data Book. Every single member of the team paused and watched as the owls moved trees, awed and humbled by what was, for the majority of the team, a first sighting of this bird, or in birders' parlance, a 'lifer'.

The birds were keenly aware of the human presence, and eventually flew off to hide in the foliage of the surrounding trees. Not wanting to disturb them further, the party set off back towards the game drive vehicle - exhilarated and enthralled - and with photos in hand!!

'CyberTracker is a valuable tool for the efficient collection of field data in order to monitor the ecosystem. The information collected helps management to detect changes in the system over time as well as identify trends.

'Thank you to everyone, online and off who has supported this 'mission'' says Nedret, 'from the forum members who have so genorously given their money towards CyberTracker, to Frank and Julius for their time and guidance, to the team members and support team- and to the caterers at Letaba who organised a delicious vegetarian bush braai for the A-Team!'

The Sanparks Forum community continues to grow, with more that 10 500 members, and it continues to be a space for people to share their passion for, questions about and experiences of Sanparks, and increasingly, raise funds and awareness about Sanparks for an international community.